Kennedy half dollars are among the most popular rare coins of the USA, and many have a value far higher than simply 50 cents. The first year of issue 1964 Kennedy half dollar is extra special because it is 90% silver, and was struck at the Philadelphia and Denver branches of the US Mint. 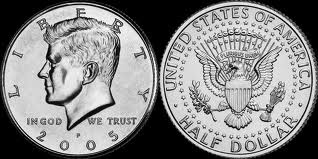 Following the extra special first year of issue 90% silver Kennedy half, for the next 6 years, from 1965 through 1970, Kennedy Half dollars were struck in 40% silver. The last of those years, the 1970-D, is a key date in the series with a value much higher than the other dates, it was only included in US Mint issued "Mint sets" and none were released to general circulation.

You may have a silver Kennedy half and not even know it, if you have any Kennedy half dollars dated 1969 or earlier, those are 40% silver! The rise in metals prices over the past few years has simply added much to their value.

With one ounce of pure silver trading at $32.50USD, each 40% silver Kennedy Half is worth $5.00 for the value of the silver alone - that's ten times face value!

Of the non-silver Kennedy half dollars, 1982 and 1983 halves from both Philadelphia and Denver in very high grade mint state are very rare, desirable, and valuable.

If you are faced with Kennedy half dollars or any other coins that are degrading, including due to improper storage, the good news is they may possibly be able to be recovered by experts at NCS (Numismatic Conservation Services LLC).

Like the Walking Liberty half dollars and Franklin half dollars before it, at least among modern US coins, the Kennedy half is likely to remain a popular favorite for a very long time.

and connect on Google+.